January 2019 Case Of The Month

January 2019 Case Of The Month
Focus on Hydrocephalus

Mollie, a 3 month old FI Pembroke Corgi, was referred to Specialists in Companion Animal Neurology for evaluation in change in behavior, circling and blindness. The owners had recently purchased Mollie from a breeder and reported that she seemed normal the first week but started to show signs of illness shortly thereafter. Two weeks prior to presentation, Mollie was seen by her primary care veterinarian for possible neck pain and treated with meloxicam; which resulted in transient improvement. Three days prior to presentation, an acute neurological decline was observed by the owners. She was re-examined by her primary care veterinarian; routine labs were unremarkable.

On presentation, Mollie‘s examination revealed the following abnormalities: Compulsive circling and wandering, inappropriate/unprovoked vocalizations, blindness, divergent strabismus (Figure 1), hypermetria and positional vertical nystagmus. Mollie had a dome-shaped head but an open fontanelle was not appreciated. The neuroanatomical localization was multi-focal likely involving the forebrain, the midbrain and the cerebellum. Differential diagnoses included: hydrocephalus or other congenital structural abnormality, infectious/inflammatory disease and metabolic. A toxin was not included on the list of differentials due to the worsening of signs over several days. Upon admission to the hospital, an ammonia level was measured which was found to be normal. An MRI of the brain revealed severe hydrocephalus (Figure 2A and 2B) with increased ventricular pressure. Cerebrospinal fluid (CSF) was taken for both diagnostic and therapeutic purposes. Three mls of CSF was removed in order to temporarily relieve pressure in the brain; analysis revealed it was mildly inflammatory and hemorrhagic reflecting significant intracranial pressure. 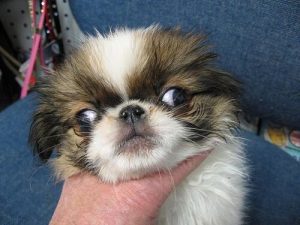 Divergent strabismus. Note the lateral position of the globe bilaterally in this hydrocephalic dog. 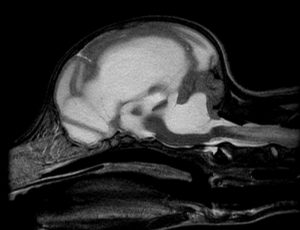 Figure 2A
Sagittal T2 weighted image. The ventricles are extremely dilated and appear white in this image sequence. 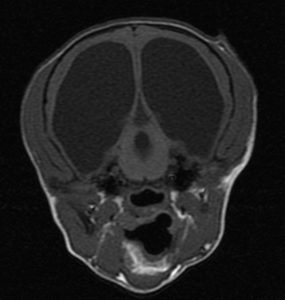 Figure 2B
Axial T1 weighted image. The lateral ventricles are severely dilated and appear black in this image sequence.

Mollie was discharged on a tapering dose of prednisone (0.5 mg/kg PO BID, initially) and omeprazole (1 mg/kg PO q24h). Unfortunately, her neurological disposition continued to decline despite medical intervention. Placement of a ventriculoperitoneal shunt was offered and considered by the owner but the fact that there was no initial improvement with medical therapy, the prognosis for recovery post-shunt was poor. The decision was made for humane euthanasia.

Hydrocephalus is defined as increased accumulation of cerebrospinal fluid (CSF) within the cranial vault, most commonly confined to the ventricular system. Hydrocephalus can be divided into two etiological categories, namely congenital and acquired.

Congenital hydrocephalus, also known as communicating hydrocephalus, is present at birth and is often associated with a domed-shaped head and/or a palpable, open fontanelle. Most commonly it is a dysfunction of impaired absorption of CSF vs increased production of CSF. Divergent strabismus (Figure 2) may occur in affected dogs.

Acquired hydrocephalus, also referred to as obstructive or non-communicating hydrocephalus, occurs when the flow of CSF is blocked by a mass, infection or some other abnormality.

It is important to note that many dogs (and cats) have hydrocephalus and are asymptomatic; these cases do not warrant medical or surgical intervention. For patients that are symptomatic, medical and/or surgical treatment may be indicated. Treatment options include short term use of prednisone and omeprazole; many young, mildly affected patients with congenital hydrocephalus will respond favorably and stabilize over time. Patients with obstructive hydrocephalus improve if the cause of the obstruction is resolved (medically or surgically) or if a V-P shunt is placed. With congenital hydrocephalus, V-P shunts are placed if the patient is young, has moderate to severe neurological dysfunction and initially responds to medical management. Patients that have surgically implanted shunts often improve over several months however, severe complications such as infection and shunt obstruction can require surgical revisions.