February 2019 Case of the Month
Focus on Cervical Pain 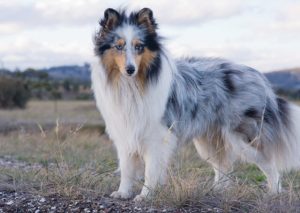 Sophie is a 7 year old Shetland Sheepdog weighing 8 kg. Recently, the owner noted urinary accidents and a presumptive urinary tract infection was treated by a primary care clinic with no response. The owner sought a second opinion when the problem did not improve. A second primary care clinic continued therapy but when Sophie began to show neck pain and difficulty walking, she was referred to a local internist who noted the severe cervical painand ataxia and referred her to SCAN on an emergency basis.

At presentation, Sophie was laterally recumbent and obtunded. Menace could be demonstrated OD but was slow and oculocephalic movements were reduced. When supported she tried to walk but was profoundly ataxic. The cervical region was rigid and palpation elicited a severe pain response and muscle spasms. Primary intracranial disease (neoplasia or inflammatory disease) was considered most likely with secondary referred cervical pain or extension of inflammatory disease causing cervical pain.

MRI was performed in several planes with and without contrast. A large mass was found in the thalamus (figure 1) with the location suggesting but not confirming a pituitary origin. The mass was moderately but not intensely contrast-enhancing (figure 2). Signs of impending herniation were noted on a sagittal view (figure 3) so the procedure was completed as quickly as possible to end anesthesia and institute aggressive supportive care. 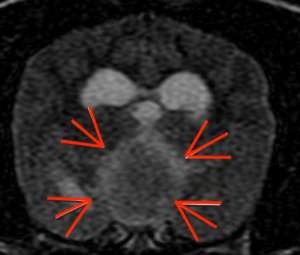 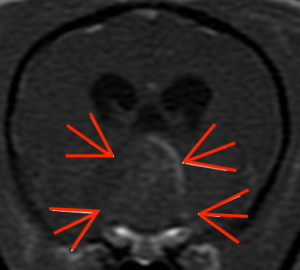 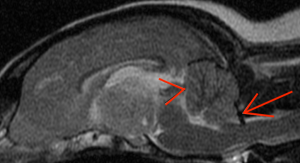 During anesthetic recovery and transport from MRI to the recovery area, Sophie’s voluntary respirations began to slow and stopped altogether within a few minutes. Despite removal of all anesthetic agents she remained apneic and did not recover any detectable cranial nerve function. The pupils remained fixed and dilated consistent with progressive tentorial and foramen magnum herniation. Heart rate declined rapidly from this point and stopped spontaneously; the owner declined aggressive resuscitation. Necropsy was declined as well.

Cervical pain is usually assumed to be related to intervertebral disk disease, diskospondylitis, inflammatory disease (infectious meningitis, immune/idiopathic disease such as GME/MUE or eosinophilic meningomyelitis), or structural diseases such as Chiari-like Malformation and syringomyelia or atlanto-axial luxation. In certain individuals with immune-mediated polyarthritis, the small synovial facet joints between vertebrae can be inflamed enough to cause significant spinal pain. However, it is important to note that as many as 30% of patients with space-occupying intracranial mass lesions are presented with spinal pain as the only clinical sign. Some of the most intensely painful patients we have seen had no detectable motor or cognitive deficits despite huge thalamic lesions (“thalamic pain syndrome”). In these patients there is no pathology in the spine itself but the thalamic mass results in the brain inappropriately perceiving pain apparently coming from the spine. Stretching of meninges associated with increased intracranial pressure has also been proposed as a mechanism for spinal pain associated with intracranial mass lesions. Eventually these patients will develop signs of their intracranial disease. Rarely, there will be a rapid decompensation from vascular infarction or hemorrhage of the tumor resulting in progressive and sometimes fatal neurologic events.

Previous Cases of the Month